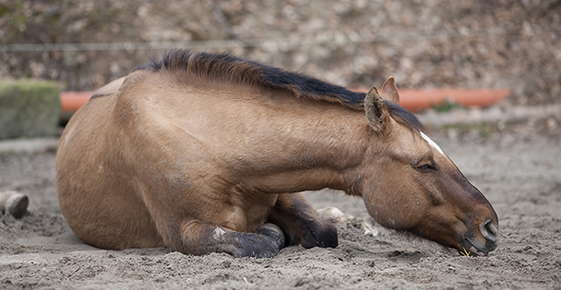 A seizure is caused by a period of abnormal electrical activity in the brain. Seizures tend to come on suddenly and end by themselves. They also sometimes occur again. There are three main types of seizures:

The most common causes of seizures in foals less than 2 weeks of age include:

In foals less than 1 year of age, the most common causes of seizures include:

Adult horses have a higher threshold for seizures, which means more brain damage must occur before they have a seizure. The most common causes of seizures in horses over 1 year of age include:

Diagnosing a horse with seizures can be difficult because an equine veterinarian is often not present during a seizure. The following may be used to identify the underlying cause:

Treatment depends upon the underlying cause of the seizures — ingestion of toxins will be treated differently than a head injury will be. Treatment options for seizures include:

If your horse has had a seizure, contact us right away. We will examine your horse and suggest suitable treatment options.